We are delighted to announce version 2022.49 of Deskpro Horizon. Our developer team has been working hard to build new features, add functionality, and fix bugs to improve your helpdesk’s performance.

We have some exciting new features that will be available to use on your helpdesk, which include:

✨ We made improvements to the Global Search app

On-Premise Customers will need to repopulate their Elasticsearch Index after upgrading.

✨ We Enhanced our Kanban View

We added the ability to drag and drop tickets between columns in Kanban View (SC 95178). And moving a ticket between columns will update the properties of the ticket, such as status or assignment. 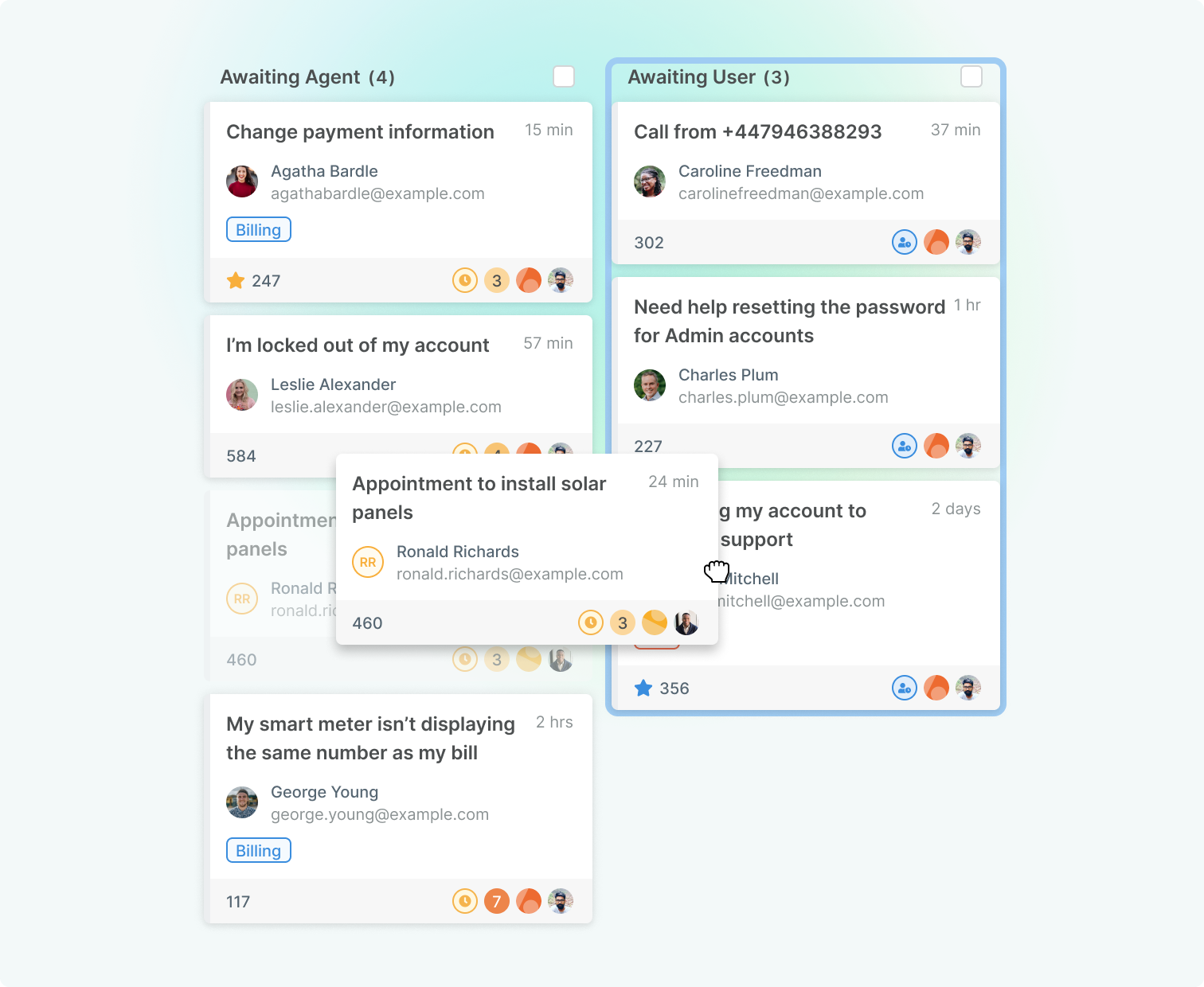 We have also added grouping, and automatic sub-grouping, of tickets in line with your sub-values like sub-statuses or departments.

✨ We added the ability to independently resize the ticket properties pane and User or Organization profile on an open ticket (SC 93841).

✨ We have released version 1.0.0 of our GitLab and TeamViewer apps, and we have also released a new version of the GitHub app (SC 96126).

💅 We added a spinner to indicate that the Reports interface is loading after it has been selected (SC 80627).

💅 We have improved the behavior of our Global apps so that your viewing preferences are remembered between sessions. This will ensure that your Global Apps will remain locked open on the interface following a refresh (SC 95478).

💅 We improved how Snippets are inserted into messages they will now be inserted where your cursor is in the reply box, making Snippets more convenient to use (SC 78900).

🐛 Fixed an issue where Tickets would get stuck in the Live status when no active chat or call was in progress (SC 70344).

🐛 Fixed an issue where grouping tickets by custom field didn’t display the correct tickets if the queue has been grouped by criteria in the Navigation Panel (SC 93151).

🐛 Fixed an error that would occur when creating a custom Help Center template in the editor because it was connected to legacy API endpoints (SC 93107).

🐛 We resolved issues where Social Channel messages were not updating in real-time (SC 92464).

🐛 We fixed an issue where text custom fields were not being populated correctly in Snippet variables and would display as a blank space (SC 92509).

🐛 Fixed the broken link on the Edit Email Template button in the Trigger Actions section of the rule builder (SC 91781).

🐛 We fixed the validation warning that would display immediately when adding new criteria to Queues, Escalations, and Webhooks (SC 95141).

🐛 We fixed how News Posts are displayed in a category in the Agent interface. They will now default to Date Published with the most recent posts first because this matches the Help Center display and is more intuitive (SC 85400).

🐛 We changed the way that Users and Organizations load on the Change User or Add CC option, to optimize the helpdesk’s overall performance (SC 95431).

🐛 Fixed an issue where the DevOps App would error if there was an unassigned work item (SC 95460).

🐛 We restored the ability to convert a User Message into an Agent Note from the ticket message menu (SC 86967).

🐛 Fixed an issue where Javascript in a helpdesk’s name was affecting the ability to click the Log In button on the Help Center when it contained an apostrophe (SC 93360).

🐛 We resolved an issue where a Twitter account couldn’t be reconnected after it had been disconnected (SC 95777).

🐛 We updated the SLA time picker because it only allowed an increment of 15 minutes, now specific times can be defined (SC 95614).

🐛 Fixed an issue where Office 365(POP/SMTP) accounts would error and fail to fetch mail when creating a new account (SC 95800).

🐛 Fixed an issue where attachments wouldn’t be automatically included when creating a linked ticket, and added the ability to create a linked ticket from the specific ticket message (SC 92232).

🐛 Fixed the Missed Chat notifications which would link an agent to the Help Center rather than the ticket in the helpdesk (SC 91366).

🐛 Fixed an issue where a new ticket couldn’t be created if it was made from the + Create a new ticket option from a linked ticket (SC 96204).

🐛 Fixed a bug where searching for a reference or ID would fail if it began with a number (SC 95477).

🐛 We have restored the ability to view tickets in Table, Card, and Kanban view by Status and Sub-status (SC 96572).

🐛 We fixed an issue where if agents set their own language the helpdesk would only display in American English (SC 95971).

🐛 We fixed an issue where searching for a user by their email address or name was only working some of the time (SC 96634).

🐛 We have restored behaviour where tickets open at the top of the most recent message (SC 96728).

We are also pleased to announce the latest release of the On-Premise Controller.

💅 Added problem checks for the host needing a reboot, unattended upgrades are enabled on the host, and SSL certificates expiry (SC 76149).

💅 Added the ability to reset a node so it is ready to be re-added to a cluster and change the initial sync method for attachments to improve performance (SC 91289).